Bubble Bobble Gets Another Shot 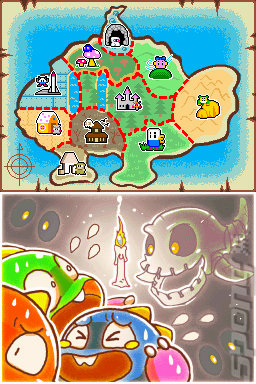 Bubble Bobble Double Shot will feature a perfect re-creation of Bubble Bobble?s frantic platforming gameplay, complete with all the secrets and bubble-flocking complexities that made the original such a rewarding game to master.

Compact levels are spread across the two DS screens, complete with charmingly detailed versions of the series? signature enemies. Rendered in keeping with the original?s retro aesthetic, both the level layout and the characters fit the Bubble Bobble style perfectly.

However, Bubble Bobble Double Shot isn?t all about pristine preservation and introduces some novel features to the Bubble Bobble template. In terms of new gameplay mechanics, players will now have to switch characters during play to take out certain colour-coded enemies. Bub, Bob and newcomer Bubu each shoot bubbles in different hues, and can be switched in the blink of an eye with a tap of a shoulder button. A new star bubble has also been introduced which allows the player to change the colour of all enemies when burst, with an ability to choose the enemies? colour by shooting the star bubble with the player?s selected character.

Also new to the Bubble Bobble template is an entirely new method of obtaining a chance to continue once all lives are lost. Several touchscreen-based micro games have been introduced, with the player taking on one at random to gain a chance to pick up the action where they left off. These include bubble-based puzzles and a frantic monster chase, where the player has to tap the touchscreen to make Bub outrun his pursuer to reach an exit back to the main game.

Moving beyond the 100-level single player mode, Bubble Bobble Double Shot?s multiplayer expands on the multi-character model by offering co-operative play for up to three players. Taking opportunities for bubble harvesting and point stealing to an entirely new level, simultaneous three-player platforming is a first for the Bubble Bobble series.

Martin Defries, COO and Managing Director of Rising Star Games said: ?These first images from Bubble Bobble Double Shot show exactly how it pays homage to its forebears whilst taking advantage of the DS. We can see how the levels occupy both screens and there are hints at some of the other features that have been added. Based on what can be seen here, we?re confident that Bubble Bobble Double Shot is going to be the best handheld version of Bubble Bobble there has ever been.?