EA Scores The Biggest Names In Football For FIFA 07 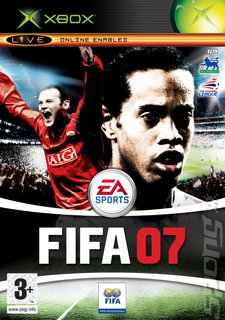 CHERTSEY, UK. ? August 11, 2006 ? Electronic Arts (NASDAQ: ERTS) today announced the match-winning line-up of players who will take to the field as the global stars of FIFA 07. Spanning all outfield positions, FIFA 07 will showcase seven of the world?s most skillful and talented players when the best-selling* video game from the EA SPORTS? brand is released to stores across Europe on September 29, 2006.

Brazilian International and two-time FIFA World Player of the Year Ronaldinho of Barcelona will feature alongside PFA Young Player of the Year Wayne Rooney of Manchester United in the United Kingdom. Other cover stars include L.A. Galaxy striker Landon Donovan and Francisco ?Kikin? Fonseca of SL Benfica, who will be featured alongside Ronaldinho in North America, Lukas Podolski of Bayern Munich in Germany, David Villa of Valencia in Spain and Juninho Pernambucano of Olympique Lyonnais in France.

?EA SPORTS works with the best players in the world to develop the most authentic football games and we are particularly proud of this year?s line-up in FIFA 07,? said Clive Downie, Vice-President of Marketing, EA Europe. ?Every player who will grace the cover of FIFA 07 is renowned as one of the best at his position in the world, and we are offering a line-up which would be a match for any team past or present.?

?FIFA is always the game I play with my team mates when we travel or get together for international duty, so it?s great to return for a second year on the cover of FIFA alongside Ronaldinho. Last season produced a lot of highlights for me, and I feel this is the season for both the game and for me professionally to go on to achieve even greater success,? said Wayne Rooney.

EA has also revealed that it has secured exclusive rights to the F.A. Premier League for an additional four years up to and including the 2010/11 season. The deal allows EA SPORTS sole rights to include every Premier League club and allows the FIFA franchise to deliver the most realistic and up-to-date game with current kits, squads and player likenesses.

"The Premier League is widely regarded as the most exciting in the world and we?re delighted to have been able to extend our current deal," said Dan Holman, Marketing Manager, EA UK. "The FIFA franchise has always delivered the most authentic game experience and our continuing relationship will enable us to maintain the high standards fans have come to expect from EA SPORTS."

This year, you have the power to shape your club?s destiny in the EA SPORTS? Interactive Leagues, a new online** mode that enables you to pit your club against supporters of your real-world opponents. The Interactive Leagues feature the F.A. Premier League, Bundesliga, French League and Mexican 1st Division. Experience the future of online gaming as you play your games according to the real-world schedule. When they play, you play. Track your team?s progress as the aggregate results determine your club?s position in the league table. Now you actually take to the pitch for the glory of your club. This is the season where you make the difference!

New intelligent A.I. ensures that your 11 men on the pitch make realistic decisions finding space and passing like professionals. A complete overhaul of the game engine now means that you have to employ real world tactics, make split-second decisions and think like a player in order to win matches. Watch as your players jostle and collide realistically while trying to win balls. Experience the realism of the world?s superstars who come to life with signature moves and authentic playing styles and a more sophisticated shooting mechanic that gives you greater control to produce finesse shots, for pin-point accuracy, or powerful laces shots. Plus you have the ability to apply topspin or backspin to the ball for more creative set-pieces.

* Based on total franchise sales according to NPD Data.