Football Manager Arriving on PC and Console for Christmas 2007!

Skill, luck and the tactics you employ will ultimately decide your fate in this year's unmissable Football Manager 2007. 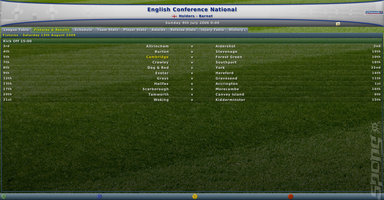 The Football Manager team has taken the fans comments on board and have introduced a host of new features across all formats. Feedback specifically on the Xbox 360 version resulted in the Sports Interactive team compiling a new user interface to allow players to have a joypad friendly experience whilst still retaining all the depth of the game. Football Manager Handheld also sees an upgrade with more playable leagues, more features and, for the very first time, network play allowing you to compete against your friends on your PSP.

"We are constantly striving for perfection and are on track to deliver our most authentic football experience yet", commented Miles Jacobson, Studio Director of Sports Interactive. "There will be a new, easy to use default skin, as well as improved hints and tips throughout the game. More in-depth feedback from your assistant manager and coaches, plus interaction with any player worldwide makes this an un-missable and very user friendly experience, and our best football game by a country mile."

Feeder Clubs - Brand new to Football Manager 2007, and one of the most requested features on Sports Interactive's forums has been the addition of feeder clubs to the game. This new addition works in all the ways you would expect it to in real life. You can establish your club as the small team who receives loan players from a larger club or a large club looking for support getting your youngsters match experience by loaning them out. Have the first option on players from clubs, and schedule pre-arranged friendlies each season by simply asking your board for a feeder relationship and choose from the list they compile.

Youth Revamp - A complete revamp of youth teams sees full youth squads for each team that has a youth set-up, thus giving a much better system for the regeneration of players in the long term game.

User Friendly - Football Manager 2007 gives players a new easier to use default skin, along with hints and tips throughout the game, and an improved tutorial. In addition to better feedback from your assistant manager and scouts as well as lots more media, customisation and multiple row selection, all this adds up to the most user friendly Sports Interactive game ever.

Scouting Revamp - A complete revamp of the scouting system inside the game leads to more information about players and teams being made available to managers, as well as a more realistic methodology for player scouting. This system allows scouts to grow and improve their knowledge-base of the world's football players.

Player Interaction - You can now talk to any player in the world via the media. Player interaction allows you to tap up other teams stars or see if players will buckle under the pressure. An effective manager must use the media as a motivational tool - why not praise your own players in many different ways or shout at them for loss of form?

Team Talks - For more varied ways to talk to your team, SI have worked hard to deliver vastly improved team talks at half and full time. Not only this, but pre-match team talks will now be making their first appearance in Football Manager - so you can send your team out onto the pitch with a specific briefing.