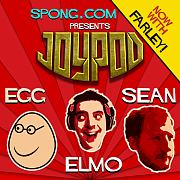 With Special Co-Host Blake Harrison, that's Neil from the Inbetweeners

Joypod Episode 26 - From China With Love

A whole new country of gaming

It's The New Emailer Special!

This week the boys talk about games for far too long.

Take off those fancy glasses.