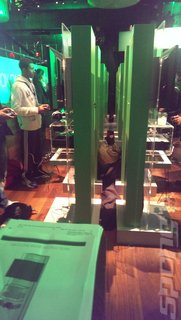 All Images (76) »
Hi from my recovery in New York. After last night initial problems things went real good. The weather was good so standing outside didn't suck.

I only lined up from 6pm to 9pm so the whole wrist band thing was good. They were a bit slow handing them out at the end of the night. I was number 85 and it took till about 12:25 for me to get mine. I think the poor bastards in the upper hundreds were probably there pretty late.

Got hands on with Ryse, Forza, Dead Rising and KI. I ended up buying Dead Rising 3 as it seemed like the best value (amount of content/modes/etc) and crushing through a horde of a few hundred zombies in a bulldozer was a hell of a good time. They actually had people going around with trays of hors d'oeuvre for the commoners like at more industry events which was nice (there were also lots of bars that were not so free).

The concert with Macklemore & Ryan Lewis was awesome. It was on for about 45-50 minutes, covered all the hits, and jokes were made about how the artists haven't been given an Xbox One yet. Of course of good free stuff (pic attached - Doritos from other photos not included as they just took up too much space in my swag bag). People in line were happy. Only complaints I heard were at the end waiting to get the things but all in all really well run.

Oh, my trip in the Forza Audi was interesting. There is nowhere in Manhattan to go fast so I just sat and made small talk with Bob from Connecticut as we drove around like six blocks in stop and go traffic. Also some of the guest star devs they had came out and chatted with people in line. Executive producer from DR3 was chatting with people by me for a bit. Real nice.