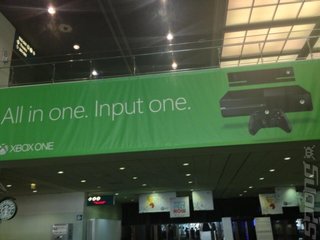 Microsoft's slogan for the Xbox One has been revealed, thanks to a cheeky snap of the LA Convention Centre ahead of E3's official kickoff tomorrow lunchtime. "Xbox One. Input one" reads a banner for the console at the event's venue.

If we're being honest, it sounds a little awkward. It's clear what Microsoft is going for here - 'input one' referring to the Xbox One's goal to be the only/primary device hooked up to your TV - but it kind of sounds like it was a slogan translated into Dutch then back into English.

Microsoft's E3 press conference will be the first of four major events taking place ahead of the show tonight, starting at 17:30 UK time. Are we excited?