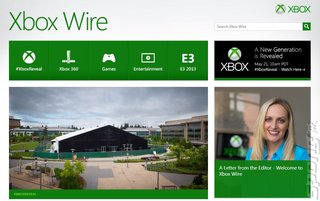 Gone are the days when news wasn't as tightly controlled for consumer electronics as for military hardware. Microsoft is leaving nothing to chance when it comes to close control of the news of its next Xbox games console.

The company is launching the new machine on May 21st in the USA, actually on its very own 'campus' in Redmond, Washington. But keeping it that tight to its chest still isn't enough. It's getting so on-message that it's also launching its own news service for the event.

Called 'Xbox Wire' this is what is "editor" Lisa Gurry, has to say in a letter:

"Hello and welcome to Xbox Wire. It?s an exciting year for Xbox ? we?re counting down the days until May 21, when a new generation of entertainment is revealed. Our team has been working incredibly hard and we have so much good news to share with you.

"In preparation, we?re launching Xbox Wire ? a news blog to help you keep up with the latest Xbox news. You will be able to follow our journey as we bring you the best in games and entertainment and along the way we?ll introduce you to the people, places and technology that bring it all to life.

"You?ll see some familiar faces on Xbox Wire. Our executives will write blogs occasionally, but most of our blogs will be from everyday people on the Xbox team. Our own Major Nelson will appear as well ? both via blog posts and through interviews ? of course, Major?s fans can also continue to follow along with him at MajorNelson.com. I?m lucky to spend my time at work living and breathing all things entertainment and I?m excited to serve as your editor here at Xbox Wire.

"We?re currently in beta mode, but expect to graduate by May 21. In the meantime, enjoy the latest Xbox news and send any feedback on what stories you?d like to see to xboxwirenews@microsoft.com or @lisagurry. If you?d like to join the conversation as we anticipate #XboxReveal, please visit us on Facebook or Twitter or at xbox.com/hub.

"Thanks for reading,
"Lisa"

Interesting use of the word "Editor" in Lisa's job title providing as it does the illusion of a media source or news message rather than a tightly controlled propaganda machine.