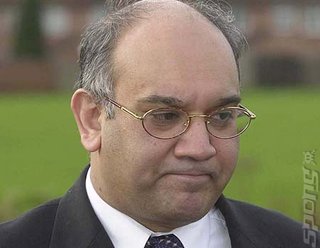 With the deadly Xmas games buying period upon us, Mr "OH NOES GAMES!" stood up in Parliament and asked:

"Could we have a debate next week about the harmful effects of violent video games?" - see, already very objective.

He continued, "Last week, the university of Indiana published research that showed that regularly playing those games resulted in physical changes in the brain."

Let's have a look... and yes there was. It used MRI scans and compared reactions. According to DailyTech it also received funding from the Center for Successful Parenting.

Mr Vaz, however, doesn't dig too deeply before stating, "At a time when parents are thinking of purchasing video games for Christmas, does the right hon. Gentleman not think that it is important to hold a debate on this matter? This is not about censorship?it is about protecting our children."

Good old Keith. If he wasn't coming out against video games, then someone sensible might... and that could be dangerous.