Do you trust these brands? 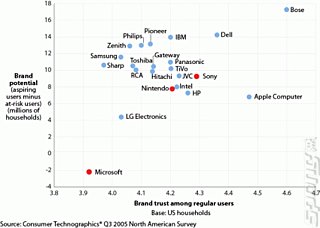 US technology research company Forrester Research has published a report that outlines the levels of trust American households have in a number of key consumer electronic and personal computer brands.

Check out the graph on the right here and you will see that, of the three main gaming brands in the survey, Sony comes out on top, with Nintendo trailing slightly behind. Poor old Microsoft is right down at the bottom of the heap, with American consumers displaying a shockingly low level of trust in the brand and it?s potential.

What does this all mean for the future of the three gaming brands though? According to Forrester?s study "Microsoft faces big consumer defection risk. One measure of consumers' dissatisfaction with Microsoft is seen in the 5.4 million households that give it a brand trust score of 1 (distrust a lot) or 2 (distrust a bit). Compared with all Microsoft users, these at-risk users have higher income, are much more likely to be male, and are bigger online spenders. These households know they run Microsoft software but would be just as happy to leave it behind - if they could."

Sony, according to the study, is in a much stronger position, but needs to be much more price-conscious than its competitors. The report notes that "Sony's current customers are affluent, young, and more likely than the general population to stick with a brand they like. Sony's prospects have a different profile: poorer than the general population, less brand loyal, and more likely to buy on price. To reach these 9.8 million households, Sony will have to tailor its marketing messages and retail presence to compete on price."

Whilst the survey is of course based on consumer?s perceptions of each of these companies? complete range of products, it does suggest that Microsoft has something of an uphill struggle to really win the looming next-gen console war. Apple, on the other hand, can do no wrong it would seem.

king skins 30 Mar 2006 11:00
1/4
Not surprised at MS low standing due to the general view of their windows software, but it would have been more interesting to the results of a Xbox brand rather that the Microsoft one.

I think people have the different perception of the two brands.

Andrew 30 Mar 2006 12:49
2/4
Agreed, Skins. If people dislike MS so much in the USA, why is the XBOX selling like hot cakes over there? I suspect that most people don't even realise that the XBOX is a MS product! MS don't exactly shout about it, do they?
more comments below our sponsor's message

So we're supposed to believe that Xbox 360 is in trouble because Sharp and Panasonic are more trusted brands? I don't follow.

Most people, including me, see that MS cash cow is not the 360, it windows and "productivity software" I think that's why most people are pissed at the big M about, anyway.

jordanlund 30 Mar 2006 19:46
4/4
You can't compare the brand "Microsoft" with "Sony" and "Nintendo" and infer something about games because both the "Microsoft" and "Sony" brands are larger than just games.

It would be interesting to repeat the study with "Playstation", "Nintendo" and "Xbox" to see what the difference is.