Like Wind In The Willows. But in a Sewer. 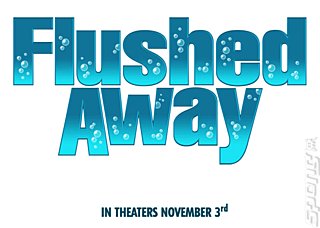 D3Publisher have just announced a worldwide publishing agreement with [URL=http://www.dreamworks.com/dreamworks_home.html] DreamWorks Animation[/URL] to publish videogames based on this coming winter?s animated feature film Flushed Away.

The movie, due out this November, comes from Britain?s finest animators, Aardman Features, and is produced by the team behind the smash hit ?Wallace & Gromit: The Curse of the Were-Rabbit?. The voice-over cast alone has already piqued SPOnG?s interest ? with Kate Winslet, Ian McKellen, Andy Serkis (Gollum), Bill Nighy, Simon Callow, Shane Richie, Jean Reno and others all providing first class VO talent.

?This agreement with DreamWorks Animation SKG is a significant milestone for D3Publisher of America and for our new operation, D3P Europe,? said Careen Yapp, D3PA?s vice president of licensing and business development.

Flushed Away, the movie, is described as ?a madcap comedy set on and beneath the streets of London?. The plot follows Roddy (voiced by Hugh Jackman, he of Wolverine fame) an upper-crust ?society rat? who lives in swanky Kensington with his two hamster butlers. Roddy is lured down into Kensington?s sewers by a low-life rat named Syd (Shane Ritchie ? genius!) where he meets the beautiful and enterprising rat, Rita (Winslet) and the villainous Toad (McKellen) ? who royally despises all rodents and wants them iced?literally. Oh and there's also an evil French frog (Reno) called, hilariously, Le Frog.

With society rats and toads it all sounds a bit like Wind In The Willows but set in a London Sewer instead of the leafy English countryside. Awesome! With the animation geniuses at Aardman behind it, the movie is sure to be a huge Xmas hit. As for the game tie-in however, the details are a little sketchier. We are told that it is ?a story driven, 3rd-person action-platform game that captures the characters and humour of the film.? The game is also to feature new characters and new environments, which apparently will add to the world of Flushed Away.

The console versions will be developed by Vicious Cycle, and the handheld versions will be developed by Altron and ART. Lets just hope the game manages to capture a little pinch of that Aardman magic and is not just yet another tired movie-tie-in cash-in. It will also be interesting to see if D3 manage to get any of the AAA voice-over talent to do any game-specific character voices.

D3Publisher have also announced the opening of their European Division, based in leafy Cambridge town. Their strategic focus, according to the press release, is ?on licensed and original titles from leading third-party developers that appeal to mass-market consumers or gaming enthusiasts.? So, the same as every other publisher then!

In case you haven?t heard of D3Publisher before, [URL=http://www.d3publisher.us/main.html] check out their website here.[/URL] They are currently publishing a few interesting titles in the US, including a PSP Brain Training type game called PQ:Practical Intelligence Quotient and, wait for it, Cabbage Patch Kids: Where?s My Pony.

Whilst SPOnG may, and will, sneer at the above title we are sure that thousands of preschool and junior American girls have bugged their mom?s into buying them Cabbage Patch Kids: This Is Pony from their local strip mall. So who?s actually having the last laugh? D3Publisher, that?s who.

Also expect to see a European version of PQ:Practical Intelligence Quotient on the PSP sometime around the launch of Nintendo?s Brain Training games for the DS. And if our friends at D3Publisher haven?t thought of this, then SPOnG will happily take a large consultancy fee for suggesting it.