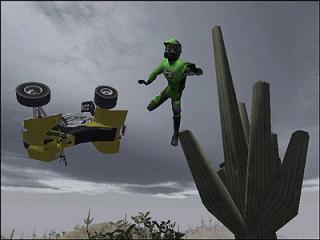 Ooops!
All Images (3) »
As you sit around waiting for Gran Turismo 3 to be released, remember that there are other racing games available for the PlayStation 2. Developers Rainbow Studios has just announced that work has finished on ATV Offroad Fury.

The title is a quad bike racer with simulator looks and arcade style game-play. For the uninitiated, quad bikes are large, heavy and dangerous four-wheel drive motorbikes that tip over extremely easily when going around a corner. ATV Offroad Fury will concentrate less on the physics involved in cornering and more on the timing of the jumps on the courses. This is important, as the faster you hit one of the hump shaped jumps, the higher and further you will go. The skill in the game will be in judging how much power to employ whilst jumping in order to ensure a safe landing. Hitting the down side of the next jump is ideal and landing on the flat area of the track is survivable. Hitting the upside of the next jump is disastrous, seeing the rider dismounted and his ATV bounce off uncontrollably.

ATV Offroad Fury will feature real vehicles from Yamaha, Honda and Polaris, all of which will be customisable. As well as being able to modify the looks of the bikes, all the handling and performance characteristics can be altered to suite the conditions and track layout. The game also promises to rock a bit, its hard-edged soundtrack will include tunes from Primus, Soundgarden and Alice in Chains.