And the Next MX vs ATV Game is... Reflex!

SPOnG has the goods 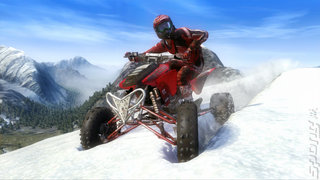 All Images (5) »
THQ has announced the fourth game in its Rainbow Sudios-developed, off-road MX vs ATV series. That game is Reflex.

It's planned for PS3, Xbox 360, PSP and DS with a release scheduled in time for Christmas.

SPOnG was present at THQ's pre-E3 Gathering of Developers event down in That London a couple of days ago and got the details.

"It's true, physics-affected terrain deformation that stays persistent in a level and is everywhere in the level. It's not just built in patches, which several other products out there have done", Ian Wood, Reflex's art director, told SPOnG in an interview.

Explaining what dual analogue control actually means for the game, Wood told us, "This is having a rider control system that is independent of the steering control system, the machine controls. So, on the left stick you'll have your steering, the right stick will be all your body movements ? forwards, back, left and right."

So far so good. As well as affecting control around the courses, it changes gameplay in other ways. "With that also comes a couple of other features ? (like) wreck recovery. One thing that's ultimately frustrating in a motorbike game is to fall off the motorbike and just sit there and wait as it resets ? unlike a car game, where you just bounce off walls. So, this one you... actually have a chance to recover from that wreck (rather than crash out completely) by just pushing your body in the direction it needs to be corrected", Wood told us.

"And also, what comes with that is the stunt system, that's also based around the right stick and body movement. So we have the stunts that go over the handlebars or over the front of the bike will be a gesture-based system as well. We've moved away from an up and down-style input. It's more about just the gestures of where your body is and where you want your body to be.

"So, pulling back on the stick will get you tricks off the back, pulling forward (gets you) tricks off the front and left and right, obviously, directional. And also, smaller rotations will net smaller tricks. A full 360 ? start at three, end at three going counter-clockwise might end up in some fabulously large stunt", we were told.

As for other vehicles - they'll be in the game, as they were in Untamed, but we don't have any details on exactly what they'll be right now.

Multiplayer is present and accounted for, with 12 players able to race online and split-screen available offline.