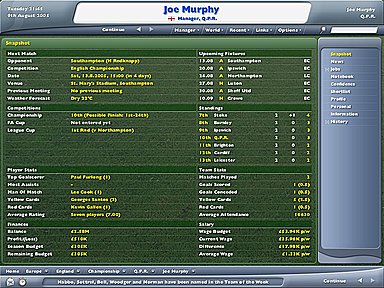 All Images (4) »
Figures released from ChartTrack today show that the UK software market continues in its post-Xmas decline, with overall value falling 31% to just under Ł18.5m. The PSP format seems to be holding up the best, thanks to the release of ‘The Sims 2’ and good solid performances from the PSP versions of ‘Pro Evolution Soccer 5’ and ‘GTA: Liberty City Stories’. PSP leaps ahead of Xbox to become this last week’s 3rd largest selling software format behind PS2 and PC.

What is perhaps quite surprising is that sales of Xbox 360 software units almost match Xbox in terms of value – Xbox 360 claiming 6% of the total software value market, just 1% less than that of its elder, fatter and uglier brother.

Charts wise, there’s few surprises again this week. EA’s ‘Need for Speed: Most Wanted’ holds on to the number 1 slot yet again, for the seventh time. The only real threat to its continuing dominance of the charts comes from EA themselves, with the PSP version of ‘The Sims 2’ helping to take the hugely popular god-game up from Number 4 last week to this week’s Number 2. The PSP version of ‘The Sims 2’ goes straight into the PSP charts at Number 3 behind ‘GTA: Liberty City Stories’ and ‘Pro Evolution Soccer 5’.

Fans of proper football games can feel truly vindicated this week as Konami’s superior ‘Pro Evolution Soccer 5’ finally overtakes FIFA in the all format charts, to claim the Number 3 slot, whilst ‘FIFA 06’ drops 2 places to Number 5. Back of the net!

Staying on the pitch – SEGA/Sports Interactive’s ‘Football Manager 2006’ re-enters the all formats top ten, going back up from Number 13 last week, to Number 8 this week, making that a total of three top soccer titles in the top ten. Well, lets not get carried away. Two top soccer titles and also ‘FIFA 06’.

Its been a good week all round then for SEGA, whose ‘Shadow The Hedgehog’ continues to top the Budget PS2, Xbox and Gamecube charts.

As we make our way into the year we start to see new releases pick up again. This Friday sees the release of Ridge Racer VI for Xbox 360 and Atari Deluxe for PC. We'll let you know how they fair on the chart this time next week.

Rod Todd 17 Jan 2006 16:20
2/2
spong wrote:
What is perhaps quite surprising is that sales of Xbox 360 software units almost match Xbox in terms of value – Xbox 360 claiming 6% of the total software value market, just 1% less than that of its elder, fatter and uglier brother.
Perhaps less quite surprising when you consider that Xbox360 games are scandalously highly priced.

Also, 360 no less fat than its elder uglier brother (If it were really from the next generation, it would be father or uncle, surely!). It just uses light colours and sneaky curves to try and look that way.