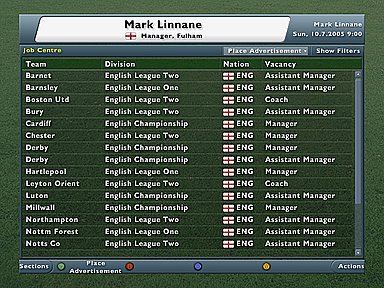 Oliver and Paul Collyer, the original founders of Sports Interactive, represent something which is sadly slipping away in the games industry, as it becomes ever more corporate, short-termist and bottom-line focused. The Collyer brothers were a pair of bedroom coders in the 1980s, who developed games out of pure passion, and as such have managed to grow a multinational, multi-million profit-turning company. Since its inception in 1994, Sports Interactive has sold over 8 million games. And indirectly wrecked countless marriages!

On the verge of the dastardly-addictive Football Manager series making its move onto handhelds and next-gen, with both PSP and Xbox 360 versions imminent, SPOnG got the jump on what's in store for fans of the best sports management simulations money has ever been able to buy.

Miles also speaks a little about the trials and tribulations of making moves into the US market – with a nod to SI’s recent new title NHL Eastside Hockey Manager and their forthcoming Out of the Park Baseball Manager. His sober and realistic appraisals of the difficult job which lies ahead of them in introducing Sports Management titles in the US makes for some interesting reading.

Speaking of the difficult Catch-22 position Sports Interactive finds itself in with regards to cracking the US market, Miles comments: “management titles are something new for the US, and the retailers need to see a breakthrough title before there will be full support, but there won't be a breakthrough unless people can buy the games!”. Well, SPOnG wishes you well out there lads.

Miles also hints at a highly secret title that’s currently in development at SI, one which may even see the light of day before Football Manager on PSP & Xbox 360. We have no idea yet what this mysterious title might be, but as soon as we do you’ll be the first to know.