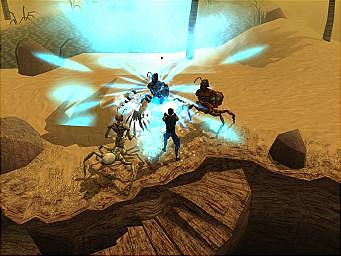 All Images (3) »
Obsidian Entertainment, the company currently hard at work on Knights of the Old Republic 2, has announced today that it will be adding Neverwinter Nights 2 to its list of projects in development. Obsidian has enjoyed a close relationship with respected RPG developer Bioware, the company that had developed the first KOTOR and Neverwinter Nights titles, so this should see the newly-formed team enjoy a lucrative future.

Feargus Urquhart, CEO of Obsidian has strong credentials in this genre. During his time at Black Isle Studios he worked on games such as Baldur?s Gate 1 & 2, Baldur?s Gate: Dark alliance, Fallout 1 & 2 and Icewind Dale. This should help Obsidian build a masterful product once it has fully realised the Dungeons and Dragons universe in which Neverwinter Nights 2 will be set.

It?s all good news for RPG fans, who should be able to stretch their dungeoneering skills to new reaches once Neverwinter Nights 2 is released on PC at some point in 2006. Atari, which has been awarded publishing duties, has also made a brief mention of a possible next-gen console version, although of course, this has yet to be finalised.
Companies: Atari Bioware Obsidian
People: Feargus Urquhart
Games: Neverwinter Nights Neverwinter Nights 2 Star Wars Knights of the Old Republic II: The Sith Lords