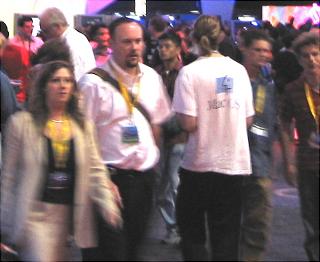 Showhall NPC AI at work
All Images (4) »
With time slipping away from us, we missed a couple of key points in the South Hall yesterday so today we're going back to fill in the gaps.

On the third day of E3, the place is very much different, with a noticeable vibe of relief and closure about proceedings. For instance, the chirpiness of the first two days is extinct, replaced with a collective sense of fatigue emanating from most stands.

It's a harsh show, especially for the PR staff and the journalists they drag around Hollywood all night. There are a lot of people here, right now, that really could do with a few hours in bed, some even resorting to sleeping on the floor.

Anyway, a nosey on the THQ stand brings the expected range of high-end licensed software into view. As you may be aware, THQ is the second most successful publisher of licensed software after Electronic Arts and this fact is unmisssable on the booth. WWE Day of Reckoning, Fairly Odd Parents, Jimmy Neutron: Attack of the Twonkies, Power Rangers: Dino Thunder, Nicktoons: EyeToy, Hot Wheels Stunt Track Challenge, SpongeBob Squarepants, The Incredibles, The Punisher dominate the space, joined by monster hits such as Full Spectrum Warrior.

It is worth mentioning that the Marvel license, The Punisher, for PlayStation 2 is perhaps the most violent videogame of all time and will cause mayhem upon its release, unless significantly changed from the version on show here. It will be interesting to see if THQ can play the "we just followed the comic" defense though it's unlikely that the Punisher will be released into Europe unchallenged.

As ever, Eidos brings a solid line-up of software to E3, despite reshuffling some of its key operations, missing Lara Croft and terminating relationships, for whatever reason, with various developers. The theme of this year's showing is Violence: Also Sex with Hitman taking centre stage. Also on offer is Shellshock: Nam '67 from Guerilla, Thief: Deadly Shadows, Backyard Wrestling 2: There Goes the Neighbourhood, 25 to Life, the FPS Snowblind, Crash 'N' Burn and Imperial Glory.

25 to Life, dubbed Grand Theft Eidos, has gained some ground in the key crime genre, though its true appeal will tell in time.

Over to Activison, we have to begin be congratulating US giant on its stand this year. Although paling when compared to previous glories, Activision has made a great deal of effort, and spent a huge amount of cash, ensuring that Hollywood vibe, with impressive sets from Spider-Man littering the booth.

Activision's line-up is amongst the most impressive on show, with Doom 3 and Spider-Man 2 catching attendees like digital flypaper. Augmented by its ongoing relationship with LucasArts the firm really is sitting pretty, a swelling force again. Knights Of The Old Republic II, Republic Commando, Mercenaries and Star Wars Battlefront have all been received brilliantly well, with KOTOR 2 gathering pace by the day.

The Atari booth is understandably all about Driv3r this year, the biggest title on the rebranded French publisher's radar. Shadow Ops: Red Mercury is clearly Atari's second biggest title, taking up a huge amount of space and filling it with players. T3: Redemption seems like something of a licensing error, especially with the franchise so badly scarred by so many poor cash-ins though the film did do well at the box office.

Mark Ecko's Getting Up: Contents Under Pressure, described as "the ultimate urban culture game" by Atari brings graffiti and baggy clothing to shelves later this year. We loved this game and we'll bring you more in-depth coverage of the tag 'em up soon.

Capcom's booth is the usual mixture of Akihabara game store and Los Angeles liquor store, with the coin-op cabinets, incidentally powered by MAME (Multiple Arcade Machine Emulator) generating an authentic arcade feel. In what is perhaps its biggest and most assertive showing to date, Capcom highlights include the awesome Resident Evil 3, perhaps the most impressive, most ambitious GameCube game to date, Onimusha 3, MegaMan Battle network (a game that seemed about as boring as a game can get) Way of the Samurai 2, Crimson Tears and Capcom Fighting Jam are noteworthy for very different reasons.

Capcom Fighting Jam is perhaps the best-received piece of software to be announced by the Japanese legend, joining Viewtiful Joe in Capcom's top-tier of hardcore gaming.

Joji 16 May 2004 12:21
1/1
Interesting...Capcom running games on MAME? I'd really like to know more companies stance on the emu debate, especially the japanese softcos. Is Capcom using MAME saying it's ok for folk to use it too, or not? It's a mixed message were are getting, one we need to be cleared up. Are they actually bothered anymore, about hounding arcade emu fans?

It's strange Killer 7 wasn't there, I thought Capcom were singing it's praises. Has something gone wrong?