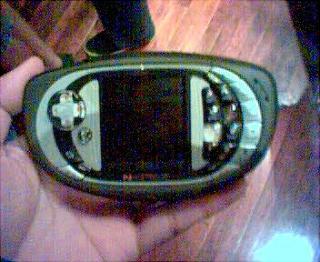 All Images (4) »
The re-designed N-Gage gaming handset has seemingly been shown just hours before its scheduled global unveiling, set for tomorrow in London.

We received these convincing pictures this morning, which appear to show a rounder N-Gage phone, complete with camera functionality.

Speaking to a Nokia spokesperson this morning, we were told, "We also received these pictures this morning and it came as quite a shock. I cannot comment on the authenticity of them however, you'll have to wait until tomorrow."

As you may remember, we exclusively revealed way back at the beginning of October last year that a complete re-design of the N-Gage was underway at Nokia.

And wait we will. Expect a full update tomorrow afternoon with the new N-Gage fully exposed.

jon_m_k 13 Apr 2004 11:02
2/6
There is no camera on this N-Gage it is just running the same Symbian 60 operating system as other Nokia camera/smart phones as it is only a prototype.
more comments below our sponsor's message

Joji 13 Apr 2004 11:05
3/6
I don't care what it looks like or how many polygon it can squeeze out. This thing is doomed from the start, because of the yearly upgrading of mobile phones that the public seem to do. Also with all the competition from other mobile phone maufacturers, they got a steep hill to climb, let alone going up against Sony and Nintendo. I admire Nokia for trying though. If this thing wasn't a phone it might have a chance, maybe.

I read in one of the "quality" Sunday paper shtis wekk that Nokia's market share in the "infuential and important" UK market has dropped from 60% to 40%.

Ah I remember 1996 when they had 100% of the market, they were the only phones you could buy. Serves them right for resting on their laurels and releasing the ugliest phones in history.

In the article, Nokia blamed some of the market loss on their failure to produce a clam-shell style phone... but I think the N-Gay has to take some blame too.

Actually I use a Nokia phone myself (the trusty old 3310) because I don't really like the clam-style ones. IMO the old Nokia models were OK, in a functional kind of way, but their current designs point to designers working on originality without any talent, and that goes for all their new stuff, not just the N-Gage.

Also, they've apparently decided that the standard phone numeric pad isn't good enough for them and they're going out of their way to "invent" a new one. This makes their phones difficult to use, and IMO that's one of the main reasons their sales are dwindling. Unfortunately, they've managed to set a trend for other manufacturers as well, eg. Siemens.