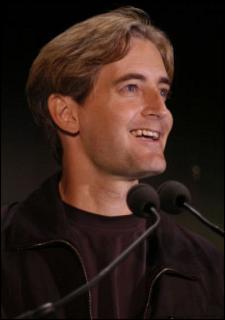 Microsoft?s key gaming ambassador Ed Fries has resigned as head of Microsoft Games Studios in what will be seen as a massive blow, both to the credibility and future prospects of the Xbox gaming push.

The shock news, revealed at close of business yesterday in the US, sees the popular Fries depart from Microsoft after over 18 years of service.

The exact reason for the move was not announced, though Microsoft is spinning the same ?pursue other opportunities? yarn that accompanied other high-profile walks, including that of Seamus Blackley, the man accredited with co-crafting the Xbox alongside Fries? games strategy.

Speaking yesterday, Fries said, ?I want to stay involved in the game business, but at the same time I'm looking for more balance in my life,? a direct reference to the fact that, as a dedicated and proud father, he has a one and a half year old son.

Microsoft is playing a game of startling honesty over the departure, which must be seen as a body blow to the Xbox?s medium term strategy. High-ranking executives such as Xbox Chief Robbie Bach, make no secret of the fact that the whole department, on a global basis, is reeling from the news.

Amongst the most alarmed at this news will be the development community across the world. Fries was seen as a bastion of fairness and arguably the only person ever to be at such a level and actually understand games and the needs of gamers and developers. Although often wheeled out as an unwilling evangelist (that job was better left to J Allard) Fries? popularity and impeccable reputation within the industry came from an unerring belief that the Xbox, as a games machine, should be the best console possible.

Gossip will now no doubt turn to possible reasons for Fries? move, with the evolution of the Xbox into a more generic media hub already at the top of the list of suspects.

Fries was amongst the most vocal of all Microsoft executives at the time of the Xbox launch to assure conspiracy theorists that the console would never be anything more than a very good gaming machine. It may have come as a hard knock to Fries, without question dedicated to gaming and the games industry, to see the media hub-cum set-top-box strategy emerge from the shadows, in what is widely seen as one of the greatest deceptions of the media age.

Frustration at Rare?s inability to give any kind of decent return for the mountain of cash Microsoft paid for it, will also be high in the thinking of Xbox gamers around the world.

We once asked Ed about his prized possession, a Ferrari F355. What?s it like to drive, we wondered. ?I can?t remember, I?ve been too busy. I think it was pretty cool though. Fast, nice gear-shift, from what I remember anyway.?

Exactly what other opportunities Fries is pursuing remain to be seen, though the opportunity to spend time with his family - and car - will no doubt figure prominently.

Shane Kim, COO of Microsoft Games Studios, will fill in for Ed in the short term. Whatever the future holds for Fries, we wish him the very best of British luck.