Massive deal sees Vivendi power up to next stage. 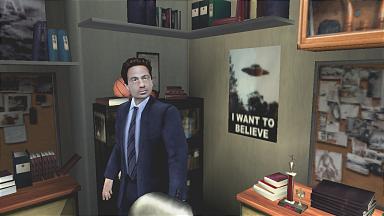 X-Files: Resist or Serve
All Images (3) »
We can exclusively reveal that Vivendi Games has acquired an unprecedented amount of Fox licenses, in a move that will no doubt come as a blow to rivals.

The deal incorporates massive brands, including X-Files, The Simpsons, Buffy the Vampire Slayer and more.

"Though we've had great success over the years with both home-grown and acquired properties, this deal presents terrific opportunities and the best business model for our content," noted Steve Bersch, President of Fox Interactive. "We feel certain that our games, and the Fox properties they are based upon, will be best served through this expanded relationship with Vivendi Universal Games, which is a leading player in the PC world and a rapidly emerging force in the console business. We have some fantastic games coming and believe this is the right step toward helping them reach their greatest potential in the marketplace."

The deal also incorporates ?future interactive gaming opportunities based on Fox content will be licensed through Twentieth Century Fox Licensing and Merchandising?, hinting that Fox is in bed with Vivendi for the long term, scotching rumour that the highly profitable games arm is about to be sold.