"Activision executives, including CEO Robert Kotick, are interested in such a deal..." 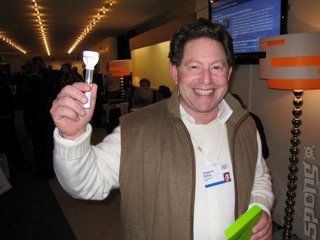 All Images (2) »
Vivendi is having problems getting shot of Activision aka Activision/Blizzard at the 25% premium it requires above the $8.3 billion current market value of the games companies but there maybe a saviour at a reduced premium. It maybe that current Activision/Blizzard CEO Robert Kotick may have the cash.

Because it's cash that the French media giant Vivendi is after, even if it has to drop its margin from 25% to 12%. And it's cash that Kotick and his crew have.

Reuters reports that, aside from a buy from a company like Microsoft, "another option being explored is for Activision itself to buy out Vivendi's 60 percent stake.

"Activision executives, including CEO Robert Kotick, are interested in such a deal, but it's not clear they could offer enough of a premium to tempt Vivendi, the sources said. The games company would need to raise some $5 billion in debt to finance the deal or partner with a private equity fund."

The plot, however, thickens, "Vivendi was hoping to get at least a bidder to challenge Activision's management and get a decent premium.

"But it didn't happen so now they are considering other options to raise cash and maintain the rating in the short term," the same source tells Reuters.
Companies: Activision Activision Blizzard Blizzard Vivendi
People: Bobby Kotick