Over 1,000 fans from the UK and Europe meet the Nintendo genius behind Super Mario Brothers and The Legend of Zelda 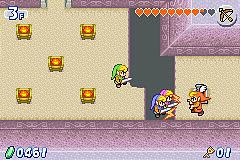 A Link to the Past
All Images (4) »
Shigeru Miyamoto, Nintendo's gaming godfather and the man behind some of the most successful video games characters in history, including Super Mario Bros and Donkey Kong, came to London to meet the gaming public.

Dozens of loyal fans queued overnight outside the Virgin Megastore on Oxford Street, London, with the crowd growing to over 1,000 by 1pm when the game signing began. From 1PM until 3PM, fans were able to meet Miyamoto-san, who is in Europe to promote the upcoming titles The Legend of Zelda: A Link to the Past for Game Boy Advance and The Legend of Zelda: The Wind Waker for Nintendo GameCube and have video games and posters signed for them.

Fans travelled from the farthest reaches of England and Scotland and even from Holland, Belgium and Denmark for the chance to meet the gaming legend.

He then went on to sign games and exclusive Zelda artwork for the fans in line, with the first fifteen fans being rewarded with free, signed copies of the Game Boy Advance title The Legend of Zelda: A Link to the Past.

Shelly Friend, Head of PR, Nintendo of Europe commented, " It's been a fantastic day, and we were really pleased to see the reception Mr. Miyamoto received from his excited and loyal fans who were thanked for their support with a personal handshake from their hero."

"We are very honoured that a legend such as Mr. Miyamoto has made this rare appearance at the Virgin Megastore. The response from the hundreds of fans that have turned up is fantastic! The day has been an enormous success and we hope this event has demonstrated Virgin Megastores' dedication to the gaming industry," commented Stephen Lynn of Virgin Megastores.

At 3PM, the event came to a close and Mr Miyamoto left the room to an astounding round of applause. It was a wonderful experience for all concerned and we hope he makes a return visit in the future.
Companies: Nintendo
People: Shigeru Miyamoto
Games: Legend Of Zelda: The Wind Waker The Legend of Zelda: A Link to the Past