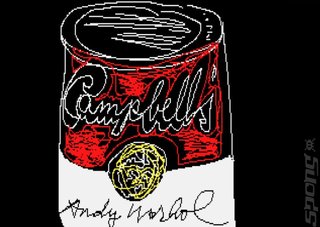 All Images (2) »
The Andy Warhol Museum has announced that what it calls, "experiments created by Andy Warhol on an Amiga computer in 1985" have been rediscovered.

The release states that, "Warhol?s saved files, trapped on Amiga floppy disks held by The Warhol?s archives collection, were extracted by members of the Carnegie Mellon University (CMU) Computer Club and its Frank-Ratchye STUDIO for Creative Inquiry in a complex recovery process. The Hillman Photography Initiative at Carnegie Museum of Art (CMOA) initiated and then documented this process for its The Invisible Photograph series."

It continues, "Warhol?s Amiga experiments were the result of a commission by Commodore International to demonstrate the computer?s graphic arts capabilities. They vary from doodles and camera shots of a desktop, to experimenting with Warhol?s classic images of a banana, Marilyn Monroe, Campbell?s soup, and portraits. One artwork resulted from the series, a portrait of Debbie Harry."

You can see this last one being created in the video below.