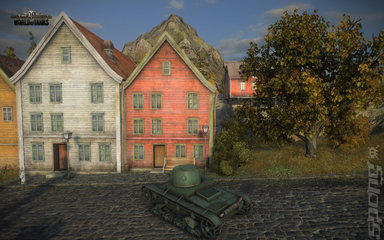 Who says video games are all about inhabiting fantasy worlds and escaping from the realities of a harsh, cruel world ravaged by failing banks and sick-minded politicians? Well, we do sometimes but one games company is taking its money and helping.

Cyprus' Hellenic Bank is the second largest bank in the in the financially troubled country and like all the other financial institutions there it's been suffering under the austerity rulings put in place to guarantee it loans. It's also been a huge haven for Russian and former Soviet Bloc cash money. So...

According to Bloomberg, "Wargaming.net is spending 40 million euros to increase its stake in the bank, the World of Tanks gamemaker said on Nov. 1. It's poised to own 30 percent of Hellenic."

Victor Kislyi, an entrepreneur in Belarus, runs Wargaming.net. According to Vedomosti, a Russian business publication, "he probably had funds in the bank that got frozen and needed to buy into the bank to be able to withdraw them. Accounts in Cyprus were frozen in March to stop bank runs when euro-area finance ministers decided to tax deposits to raise money to aid in a rescue plan. Others with money trapped in Cypriot banks have taken similar steps to recover deposits: In September, several Russians were elected to the Bank of Cyprus board, where capital controls blocked accounts."

Fun with reality, eh readers? Because Bloomberg also reports that, "As of March 26, Wargaming had deposits in several banks, including Bank of Cyprus, the nation?s largest. The game maker has expressed "uncertainties? regarding the situation in Cyprus, the company said in its annual report. That?s probably an understatement."