Dyack's Shadow of the Eternals is 'On Hold'

Many staff 'taking a break' 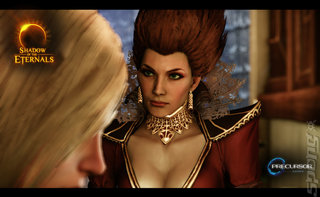 Precursor Games has put Shadow of the Eternals "on hold" and many of the developer's staff are "taking a break".

The company's chief creative officer, Denis Dyack, said as much in a post on the company's official forums. His statement tells us that, "It is with a heavy heart that we have decided to put the Shadow of the Eternals project on hold. We are very happy with what we have accomplished both as a group and with the community. The community has blown us away and was the one thing that kept us going through it all - we cannot thank you enough.

"Many of us will be taking a break. For those who are not aware, we all worked on this project as a labor of love and self financed 100% of everything for a over a year to try to make Shadow of the Eternals a reality. Although we did not succeed on doing this, we succeeded in making many friends and starting something that we hope provided value for those involved. We have no regrets. "

The game has a troubled history. Its initial Kickstarter campaign, which ran alongisde and independant crowd-funding drive, got pulled. Its second Kickstarter campaign fell woefully short. All the while, concerns were bubbling away about its connection to the legally troubled Silicon Knights, where Dyack and many other Precursor employees had formerly worked.

Dyack said that Shadow of the Eternals is not done for, though. "Is the project dead? No, but we feel it needs a rest too. We have all agreed as a group that when and if the time is right we will get together and start it up again."
Companies: Precursor Games
People: Denis Dyack