Xbox One man gets to open the carnival 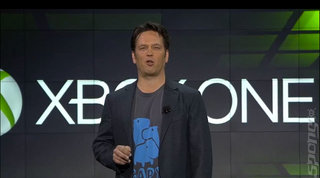 Phil Spencer, corporate vice president of Microsoft Studios, is giving the Xbox One a lift at the Gamescom conference in Cologne next week. He's giving the flipping opening keynote address.

Spencer won't be alone though, also at the August 21st opening will be mayor of Cologne, Jürgen Roters and Philipp Rösler the Federal Minister of Economics and Technology. Why do we mention that? Simple, for a German federal minister to be in attendance at what a few years ago was a classed simply as 'you know, a games show for the kids' is a pretty big deal.

For his part, Phil Spencer says, "This industry is at a turning point. gamescom is the ideal platform to study the influence of new hardware, to discuss accessories and software for the next generation of games.

"There has never been a better time to be a part of this industry. It is exciting to see how developers and authors to use the new opportunities and create a completely new way of playing."

Of course, that fact that Spencer leads up the Xbox One push against PS4 and is giving the keynote is also a pretty damned big deal for Microsoft.