Shigeru Miyamoto tells us why 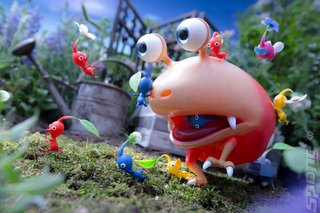 That's right, the creator of Pikmin, Shigeru Miyamoto told 4Gamer in a recent interview that there was a reason why Pikmin 3 couldn't appear on the 3DS.

That reason is the controls, he explained. "The truth is we were doing prototype tests of Pikmin for the DS and 3DS but it turned into unit management."

He went on to say that, "no matter what it just didn’t seem like Pikmin.

"We concluded that Pikmin is a game that revolves around action based on its controls and the strategy sits on top that."

Further into the interview, he explained that, "The truth is when we made 1, we were trying to make the easiest to control 3D game around. The focal point was Olimar walking around on screen but the majority of the interface was those controls."

Well, at least he's stuck to his guns - no Pikmin 3 on handhelds.

We recently reported about Pikmin 3 outselling its competitors in its debut week in Japan - read here.