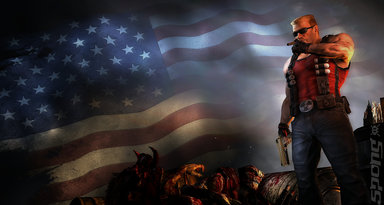 Gearbox isn't having the best of luck. After being sued in a class action lawsuit for the quality of Aliens: Colonial Marines, the Texas studio is now getting sued by 3D Realms over alleged unpaid royalties for Duke Nukem Forever.

The original developer of Duke Nukem Forever - a game infamous for being in development hell for over fourteen years, just to remind you - is seeking more than $2 million for the missing cash, and claims that Gearbox had blocked independent auditing of the royalties 3D Realms earned over the 2010 acquisition of the project.

Gearbox has released a statement denying all claims. "The reality is that 3D Realms received the full benefit of its bargain." It argues that the terms of the Duke Nukem Forever sale from 3D Realms allowed Gearbox to deduct the $2.9 million debt that it acquired from 3D Realms' own development. The contract, apparently, stipulated that Gearbox was going to get its own money back before 3D Realms became entitled to royalty payments.

"Gearbox, in fulfilment of its commitments, enriched 3D Realms, saved 3DR from its debts and rescued 3DR from its failed dozen plus year attempt to ship [video game] Duke Nukem Forever," the statement continues.

"Everyone wished that 3DR's game was better received by the market for the benefit of gamers and profit to its creators. While 3DR might not wish the reality that the results make clear, 3DR turned out to be the only beneficiary of the deal. Gearbox Software, meanwhile, experienced damage to its credibility and loss of its money."