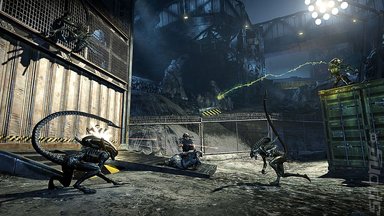 SEGA and Gearbox are facing a class action suit alleging that they falsely advertised Aliens: Colonial Marines with demos at trade shows that didn't represent the final product.

The suit, which was brought to light by Polygon, has been filed in the Northern District of California by Edelson LLC on behalf of Damion Perrine. It states that demos featured graphical quality, AI behaviour and entire levels not present in the final game.

The suit adds that late embargoes on reviews (see ours here) stopped early buyers from getting knowledge of the discrepancies.

The suit highlights a tweet from Gearbox president Randy Pitchford who, when questioned on why the final game "is so different from the demo", replied, "That is understood and fair and we are looking at that. Lots of info to parse, lots of stake holders to respect." Questioned further, he added that he couldn't address the issue on twitter and that they were looking into when and where they could discuss the matter more fully. Maybe the courtroom will prove to be the ideal venue.

"Unfortunately for their fans, Defendants never told anyone ? consumers, industry critics, reviewers, or reporters ? that their 'actual gameplay' demonstration advertising campaign bore little resemblance to the retail product that would eventually be sold to a large community of unwitting purchasers," the suit states.

In Early April SEGA was forced to hold its hands up and admit that adverts and videos for the game did not reflect the final build after a complaint to the ASA here in the UK.

Edelson promotes itself as a practice with an eye on the games industry. In November 2011 it filed a class action lawsuit in the Superior Court of California against EA and Sony over alleged failure to deliver on promises made while promoting Battlefield 3.

There's been no comment from SEGA or Gearbox as of the time of publication.
Companies: Gearbox SEGA
Games: Aliens: Colonial Marines