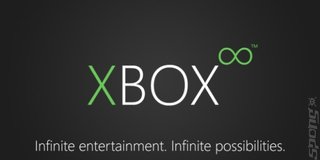 Microsoft's next console will be called Xbox Infinity, according to new rumours.

"Sources related to development of the new Xbox" have apparently confirmed to IBTimes that the new system will be revealed as Xbox Infinity when Microsoft wheels it out at an event on May 21.

Of course, such industry whispers have come after an image circulated of Reddit purporting to be the logo for the new console. The logo comes with the tagline, "Infinite entertainment. Infinite possibilities." Gag.

"Development kits are already in the hands of studios," reads the IBTimes piece. "However, when contacted for confirmation, Microsoft said it 'does not comment on rumour and speculation.'" Of course.

Like any other rumour out there, it seems entirely plausible. We've heard so many different things about what the next Xbox does - of varying believability - that it's easy to take anything on board at this point.

If Microsoft is the kind of company that wants to one-up Sony's numbered PlayStation products with silly-sounding monikers, then Infinity is probably the name to pick. Reminds us of playground fights all over again. "Your name is PlayStation FOUR? Well, my name is Xbox INFINITY. Beat that!"
Companies: Microsoft

CluckCluckStop 10 May 2013 12:47
2/5
"Playstation Infinity Plus 1" beat that xbox fanboy!
more comments below our sponsor's message

"Infinite possibilities" AKA "It only does everything"?