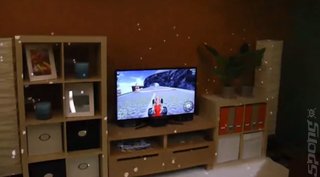 Microsoft's Xbox IllumiRoom technology - the stuff that allows a game's environment to be projected beyond your TV screen and onto your walls - has been categorised as a next-generation peripheral by the company's R&D department.

A new proof-of-concept video has hit the internet outlying some of the features of the IllumiRoom device. It involves a projector that sits on your coffee table, working in tandem with a Kinect sensor to display a game's surrounding world in real time.

The benefits are plenty, according to the developers in the video, "enhancing traditional game experiences" and "enabling entirely new experiences." Weather conditions can be represented outside the TV screen to better set a game's atmosphere, for example, while friendlies in a shooter will e easily identifiable with the use of light markers.

Take a look at the video below and see what you think.