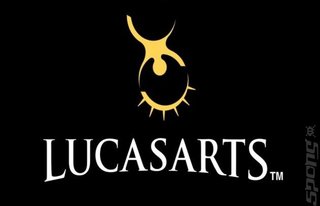 Someone has apparently explained the Disney that when it comes to games, the venerable and much loved LucasArts is "not the company you are looking for", so the company that brought us Hannah Montana has closed down the people who were to bring us Star Wars 1313 and did bring us Monkey Island.

LucasArts offered a statement that is so couched in BizNizBS as to be almost completely unreadable:

"After evaluating our position in the games market, we?ve decided to shift LucasArts from an internal development to a licensing model, minimizing the company?s risk while achieving a broader portfolio of quality Star Wars games. As a result of this change, we?ve had layoffs across the organization.?

According to Yahoo - which attributed the above statement to Disney - "Moving forward, the company that brought forth such gaming classics as Grim Fandango, Sam & Max and The Secret of Monkey Island will only be a shell whose name is used to license games."

Wired, which attributes the statement to LucasFilm, says, "a representative said that internal development on announced games, like the next-gen shooter Star Wars 1313, had been ceased but that the company was evaluating its options as regards having those games completed by an outside developer."

Kotaku, which attributes the quote to LucasFilm quotes "an anonymous source inside the company that said such options had already been explored, and Disney found no takers. So it?s looking quite unlikely that 1313 will ever come out."

Forbes sums the situation up: "Although Disney acquired LucasArts on October 30, 2012, Disney has made some sweeping changes gradually, such as cancelling the long-running Cartoon Network television show, The Clone Wars, as well as the upcoming live-action comedy Detours in mid March. Now, after over five months, Disney executed Order 66 on their recently acquired videogames studio, LucasArts, and its 150 employees."

It also manages to use a GameInformer quote from an unnamed Disney exec ... a quote that since appear to have been deleted: " [W]e are looking for proven external partners who can help us provide video games to our fans. We still believe in the video game industry, we still will provide Star Wars games, we?re just looking at different models rather than internal production."

So, there we have it. Dead.

TheRealMRXBOX 4 Apr 2013 22:39
1/1
WHAT A SHAME . THANK SONY AND MAKING THE WHOLE GAME INDUSTRY WORK TWICE AS HARED TO CREATE A GAME TITLE FOR CROSS PLATFORMS ! THE MOVE ADD ON must HAVE RUINED and KILLED ALL KINDS OF GOOD GAMES !!!
Posting of new comments is now locked for this page.