PS3's release date has been changed to "TBA". 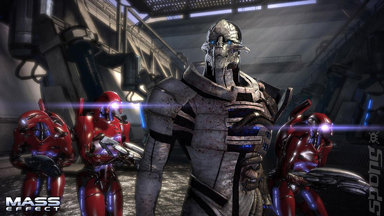 Heads up - BioWare is preparing a Mass Effect Trilogy bundle pack for a November release. But, depending on which platform you want to get it on, you may well be treated to a different selection of content. Or, in the PS3's case, potentially no content at all.

The studio confirmed that a portion of DLC will be included in the Trilogy pack, but the amount of content within will vary depending on platform. On PC, you'll get Mass Effect 1's Bring Down the Sky and Pinnacle Station add-ons, Mass Effect 2's Cerberus Network Day 1 DLC (which includes Zaeed) and Mass Effect 3's online pass. The Xbox 360 version won't have the Mass Effect 1 DLC.

And as for PS3? Undecided. But that's because the studio is unsure if the compilation itself will even be released for the console. Once thought to release on November 7th with all the other platforms, the PS3 edition has been moved to a "TBA" date, while the PC and Xbox 360 versions have been moved forward to a November 6th launch. More information will be available "soon", apparently.