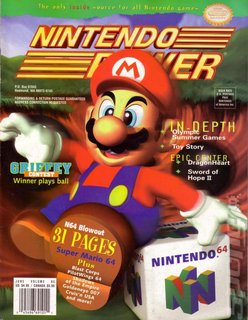 It looks like the end of an era for the US gaming magazine industry, as Future Publishing's Nintendo Power has reportedly been closed. Ars Technica cited an anonymous source on the news just hours before senior editor Chris Hoffman confirmed the situation on Twitter.

The publication is one of the longest-running games magazines in the US, having been consistently published on a monthly basis since 1990, and bi-monthly since its creation in 1988 as a Nintendo Fun Club newsletter spinoff. Nintendo Power was then contracted out to Future Publishing back in 2007.

According to the unnamed source, Nintendo was "uninterested" in renewing its contract with Future, and that the Wii company was not keen on taking direct control of the magazine again. "Difficult to work with," the source added that Nintendo was also resistant to take part in a "number of digital initiatives that Future saw as necessary for the long-term health of the brand."

For what it's worth, neither Future or Nintendo have responded to comment. Although Hoffman said on Twitter that he was "sad to see it go", it appears that such comments were removed from Twitter shortly after Ars posted an update to the story.

ComputerandVideoGames.com (CVG), a gaming website owned by Future Publishing, covered the magazine's rumoured closure last night, following up today with a story on its actual closure. Both stories have since been removed.