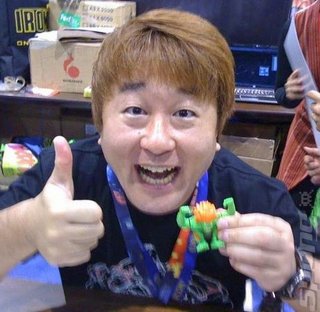 Capcom's leader of all things Streetfighter, Yoshinori Ono, is a man who even a near-death experience can't stop in his tracks. He is a man of massive and infectious enthusiasm. He wants the whole world to play fighting games.

He is also totally on the mark when he says that, "If (Street Fighter) had been a purely single-player thing, it would never have grown so popular."

Mr Ono, who was hospitalised with a serious yet undiagnosed illness in April, is undiminished in his love of the fight game.

"In my philosophy, Street Fighter is a game, but really it's a tool. It's like playing cards or chess or tennis: it's really about the people. Once you know the rules it's up to the players to put themselves in the game, to choose the nuance of how they play and express themselves. I think fighting games flourish because it was this social game. If it had been a purely single-player thing, it would never have grown so popular.

"My aim is to construct a universal community. Back in the arcade days you had a small neighbourhood town community playing Street Fighter together in the arcades. Then the next town had its own community. But they were isolated from one another... With Street Fighter 4 my aim was to bring these communities together with the online system. I succeeded and now I want to create the 'Order of the Street Fighter', an online community where people can meet to play fighting games. They can engage in any game, it doesn't matter which one."

All things have a price though, and this is his:

"The only rule is that every player has to pay me one Euro," he says, smiling. "This will be my pension."

What a great man.