Wii U "lack lustre" and other companies "holding their breath". 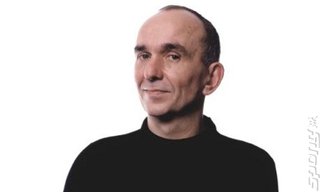 Former Microsoft Games Studios Europe boss and Lionhead founder Peter Molyneux will be a high-profile guest on Spike TV, offering analysis of the upcoming E3 trade show in Los Angeles. But, the famed developer has questioned whether the show is already past its prime. And he called the Wii U "slightly lack lustre." Oooh, get him.

In a brief exchange with Kotaku Molyneux suggested that, with E3 focusing heavily on traditional gaming, it could be left behind. "Is the biggest news that E3 itself runs the risk of being outdated, or perhaps it already is? The real challenge is how the players are going to adapt to the mounting pressure of Facebook, Apple, Social, Cloud, Multi-Gaming."

The man also had some words to say about the big three players - Nintendo, Microsoft and Sony. "Sony and Microsoft are holding their breath on next gen - interesting to see how they pad out another year. Price cuts, form factors? Nintendo's slightly lack lustre Wii U is going to have to blow us away with better specs and great 1st party line up."