Also - would he work with Peter Molyneux? Find out here. 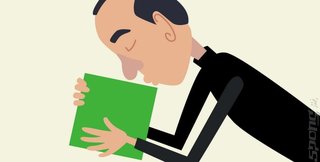 Peter Molydeux, the man, the mystery, the inspiration for the recent MolyJam game jam that attracted more than 1,000 people to more than 30 locations worldwide. He's spoken to SPOnG's podcasting partner Joypod exclusively about working with Peter Molyneux and also what his fave MolyJam games are.

Speaking on the Joypod cast the man behind Peter Molydeux explains that the game jam, which asked people to design games based on Molydeux's surreal tweets, "would have gone ahead even if I wasn't involved."

The idea that Peter Molyneux (ex-Microsoft, Lionhead and Bullfrog UK game design legend) might also get involved occurred later. By then both the real legend and his Internet alter-ego had been in contact with each other.

"He actually contacted me very early on after he left Lionhead," says Molydeux's creator, explaining that Peter Molyneux told him that he was finally now, "able to get in contact with me, which he wasn't before."

Why wasn't he able to before? "It's like marketing and publishers, worried that it'd cause problems. It was better that he just cut ties with me. Cos he can't really trust me... and you can't really blame him."

So, now he could talk, what did he say? "Just that he's enjoyed my work, and if we want to - you know - collaborate in the future that might be possible.

"I actually didn't' realise that he'd sent me an email until a week after. I was just looking in my inbox, which I don't look at much, it's in my Petermolydeux gmail, and I was like: 'Oh, and he's sent this? And it's like a week ago."

So, has he apologised for the tweets? For example, he got his son involved...

"Yeah, I kind of let him know that the character had sort of evolved over time and I'd made some bad decisions... right now it's in a good place, it's tongue in cheek, it's about the right level."

Back to MolyJam. Was Molydeux's creator surprised at how big it got? Or did he think that 'Now Molyneux and myself are behind it, it's going to snowball...?'

"I thought it was insane when it was just San Francisco, it was supposed to be, like, 30 or 40 people." (It ended up with over 30 locations and more than 1,000 people involved).

Was he tempted to go to one? "There was talk of me going to San Francisco but I kind of like just being incognito a bit... I was just watching everybody on the live stream."

Has he played any of the Molyjam games that came out of it?

"It's a lot of really bad quality... because it's just 48 hours. I mean, you follow the Pickford's Billiards game - they've spent like months and months just polishing and polishing. For 48 hours all you can get is an inkling of a potential idea and I think there were several of those that I can see other people exploring."

"The main one that most people called out on was You Are the Road (based on the fact that you control the road not the car. The road gives you emotional feedback for everything you're doing with the road). Also BreakTris (listen to the podcast!)"

What's his personal favourite? Which one would he like to see worked on?

"The one that just really stands out to me - just because it was based on such a bizarre tweet, which was something along the lines of: Every time you kill an enemy their death animation loops on the screen and is burned onto the screen and exists for the rest of the entire game.

"Someone just took this Tweet and created a game called Recidivism. It's just this platformer of a guy who walks left to right and just kills people as he walks past them. But their death animation just loops on the screen. After a while you sort of discover that it's obscuring the view; and after so many screens it just becomes so chaotic with, like, hundreds of people just dying on your screen and falling all over the place and it actually obstructs the view. And that was something I've just never seen before. And I think with a lot of development you could have a lot of fun with just that idea."

"Nebulous Hero was another one. Where every time you finish the game you get the tutorial..."

Does he reckon that there will be a chance to work with Molyneux himself at this new studio? Has Molyneux extended an offer?

"I wouldn't want to because it's in England... so... I'm kind of in Canada at the moment. Maybe if they came to Canada (laughs)."

Before we leave this... bear in mind Joypod fans (and critics) that when Peter Molyneux appeared in video form at Molyjam, he described Peter Moydeux as "Funny, talented... and right".

Don't forget to check all the games out here.

And DO NOT forget to listen the All New Joypod with PeterMolydeux's creator and much more...

And don't forget to tell us what you think of MolyJam and Joypod in fact on the Forum.

Ryan 16 Apr 2012 11:42
1/1
I heard he loved Babies (and possibly snakes) on a Plane too. Can't blame him I guess, even if Samuel J was basically playing himself.
Posting of new comments is now locked for this page.