Molyneux: Microsoft had Me in 'Creative Padded Cell'

Also... the address for Peter Molyneux's leaving bash is here and you're invited. 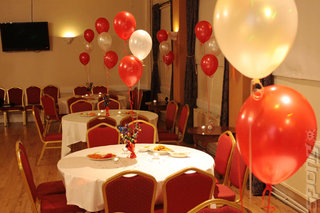 Although he's not buying the drinks, Peter Molyneux would like to see you down the boozer (or rather the pub and pizzeria) tonight for his leaving bash from Microsoft and Lionhead before his new life with 22 Cans.

Basically, be down at The Stoke Pub & Pizzeria, 103 Stoke Road, Guildford, Surrey, GU1 4JN and wish the grand old man of British gaming well in his new venture.

You might like to ask him why he decided to leave Lionhead, the studio he formed after leaving Bullfrog; the studio that was bought by Microsoft; the company that made him creative head of its game studios.

He's already told Rob Crossley of Develop, "I had this unbelievable desire to make something special. Of course I didn?t have the idea for the game itself, partly because when you?re at Microsoft any idea you have is property of Microsoft."

"I was in a creative padded cell. Microsoft was so safe. Microsoft was so nice. You?re so supported. Everything I did couldn?t hurt me, both creatively and physically. The danger was long gone. I had this huge desire to make something truly special, and I felt like I was being suffocated creatively a little bit..."

How did this become clear to him? Like this, "One day I was at the studio sitting on my chair, in the zone, my eyes closed, my headphones on, blaring music in, trying to think of ideas for Fable The Journey", he explains.

"Suddenly I felt my chair move. I looked around. Standing there was the Microsoft chair adjustment personnel, this nice woman who comes over once a month, fiddling with my seat settings to make sure it was posturepedically correct. I thought, 'This is insane'."

But then he had to tell Microsoft. He explains to Wesley Yin-Poole over at Eurogamer that, "All this stuff came together, and I went to speak to Microsoft a few months ago. They were very understanding about it. And we agreed two things. The case I put was, the best a creative person can ever do is when there is a lot of risk and when there is a lot at stake. That's hard to do within a big corporation like Microsoft. Secondly, the type of people I would need to exploit all this new stuff would be slightly different from the type of people who were at Lionhead.

"So, after a lot of talking, we agreed I would leave Microsoft and set up a new company. Of course, Microsoft was very keen to talk about a deal, but I didn't want to constrain any creative endeavours this new company would do with setting an early deal. That's what I did at Lionhead, and it really did end up constraining what you ended up doing. I spoke to a couple of colleagues who weren't at Lionhead anymore. One was Peter Murphy, another was Tim Rance. We decided to found 22Cans."

So, questions ready? Head over to Guildford tonight.