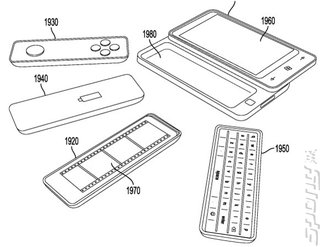 I can barely remember where I put my keys, now I have to remember where I've left bits of my phone?
While Sony is gearing up for the release of the Vita, and Nintendo has a long history of handhelds, Microsoft has always been quiet when it comes to portable gaming. Even its attempts at making mobile phone technology has been... well, not exactly up to scratch. Now it seems that the company is planning on going ahead with a hybrid device that will perform the functions of both ? and more besides.

According to a new patent application, Microsoft has developed a modular phone where the rear slides out. This back section has replacable elements that includes a solid keyboard (ideal for those who struggle with touch screen typing), an extra battery pack, a second display or ? and this is what has piqued SPOnG's interest ? a gaming controller.

With the handheld market growing increasingly lucrative, it's no surprise that Microsoft are looking for a slice of the pie. We can make a few assumptions; it'll invariably have Windows architechture and you just know they'll throw some kind of Xbox Live compatibility in there too. While it's not a full on leap into portable gaming from Microsoft (and it's still only a patent so is miles away) it's interesting to see the company dip a toe in the water.

So, what do we reckon? Halo: Portable Edition by Christmas 2012? We can but dream.