TGS: Has Nintendo Got Anything to Offer? Find Out

Some old, some new, all shiny. 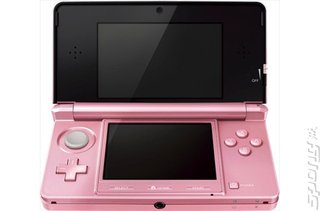 Another mildly pointless version of the 3DS.
Tokyo Game Show is just around the corner and Nintendo has done it's usual attempt at stealing some of the thunder. Holding its conference just that little bit earlier than all the other companies, it's announced an array of games from franchises old and new for both the Wii and 3DS.

The big coup? Monster Hunter 4 was confirmed (but we already knew that, of course). Also revealed were a group of other titles that will be compatible with the Expansion Slide Pad. With Metal Gear Solid Snake Eater 3D, Kingdom Hearts 3D and Dynasty Warriors VS also being able to make use of the device, it's good to see that it's not quite the white elephant we initially thought. Yet.

A shiny pink 3DS is also due for a Japanese release in October. Other games that were confirmed for the system include Mario Tennis (with alarmingly pointless gyroscopic controls), Tekken 3D, a brand new Fire Emblem title and the interestingly named Bravely Default: Fairys Tail, a Square Enix RPG. Kid Icarus is promised for January 2012.

The Wii, despite being seemingly on the way out, had a few decent revelations of its own too. Legend of Zelda: Skyward Sword (which has apparently been in development for five years) was confirmed for Japanese release on November 23rd ? surely it won't be too long after that for the rest of us?

The latest in the Olympics series is due in December, stretching out the Mario and Sonic franchise yet further as the crew come to London. A collection of early Dragon Quest games is out this week, which certain members of the SPOnG staff would kill for.

So it's seems to be the same old same old from Nintendo, not that it's necessarily a bad thing. Wii definitely seems buried and yet there was no mention of Wii-U. With the focus on the 3DS and the reintroduction of some more classic franchises some gamers have been critical that there's little innovation. Surely it's all about the games though? We'll have reports as soon as people get their hands on them.
Companies: Nintendo
Games: Kid Icarus: Uprising Kingdom Hearts 3D: Dream Drop Distance Mario Tennis Metal Gear Solid 3: Snake Eater Tekken 3D: Prime Edition The Legend of Zelda: Skyward Sword