Why Sledgehammer's Third Person Call of Duty Didn't Make It 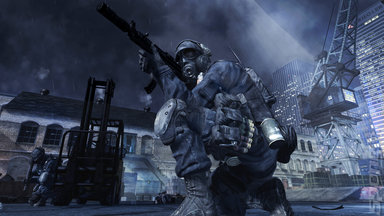 So, Sledgehammer Games was formed by Activision to give the Call of Duty series a new vision. It tried. It didn't work out. We're back to the old, and massively successful, vision. Here's why.

Sledgehammer CEO Glen Schofield explains that, "We came on board to make a third person action adventure game in the Call of Duty franchise and we were working on it for about six months."

Excellent, a new take on the matter. But wait: only six months? Then what?

Head of studio development Michael Condrey picks up the story, "We had about six to eight months on that and put a prototype together that was pretty compelling and it looked really good."

Excellent again. But is there a gory, bloody, nasty big 'BUT' hanging there? Yes, we know there is.

"We had the opportunity to work on the biggest thing in the industry with a developer in Infinity Ward that has demonstrated that they know how to do exceptional software. It was an opportunity we couldn't miss", he continues over the sound of back pedalling.

This is Condrey's conclusion. In no way were Activision execs screaming, "WTF are you wasting time on a third-person CoD!! We've got to get the cash cow out of the door by the Holidays! Get to work!!"

That simply did not happen.