Rock Manager is Coming to PC... 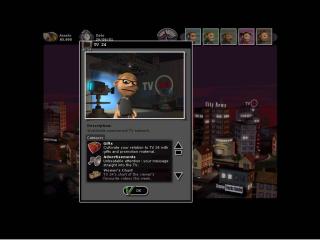 All Images (3) »
PAN Interactive today announced a UK licensing deal with Mindscape for the highly anticipated PC music management sim, Rock Manager. Originally due this month, the game will now be launched in the UK in March 2002.

Says Karin Bjorkin, PAN Interactive's International Sales Manager, " We are extremely pleased with the co-operation with Mindscape. We are also confident they will do an excellent job marketing and distributing the game in the UK. "

"It's also good to be able to announce a UK publisher and release date," adds Bjorkin. "We have literally been bombarded with questions from consumers of when the game will be released. Thousands of people are going on to the rockmanager.net official website and they can't wait to get their hands on the game."

Rock Manager created an enormous buzz when it was unveiled at E3 last May. Not only did it capture the imagination of the music industry, but it also tapped a nerve amongst computer gamers. Anyone who has a hankering for rock'n'roll comedy such as Spinal Tap, Wayne's World and the Comic Strip?s Bad News will want to take a closer look at this game.

"Rock Manager has certainly captured the moment," says Nick Naylor, Mindscape UK's Managing Director. "The game is clever, funny and totally unique. Unlike many computer games, the writing is very cutting edge and tongue in cheek. We've decided to hold back the release until March 2002 because we want to implement a massive marketing and PR campaign that'll do the game justice."

Rock Manager challenges music biz wannabes to develop a successful rock or pop act. The objective is to recruit band members, record an album and make a hit record - all the things a real band manager would be responsible for. The game features cartoon-style characters and lots of different musical genres such as rock, pop, hip-hop, thrash metal, punk, nu-metal, electronica and country and western. Unlike the ultra-intense football manager games, Rock Manager is not to be taken too seriously. The game also features a shy musical genius with zero charisma, and a gangster's spoilt prima donna of a daughter. She?s completely without talent, and even worse for an aspiring manager, totally unattractive! Now there?s a challenge.

Aug|'06
Nintendo Shifts Half a Million 'Brain Training' in Europe
Aug|'01
Rock Manager – This one goes to 11!