Nintendo Shifts Half a Million 'Brain Training' in Europe 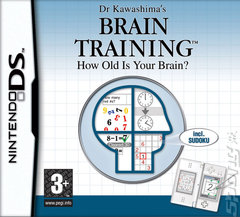 All Images (2) »
We got word from Nintendo earlier regarding the cart-loads of Dr Kawashima's Brain Training: How Old Is Your Brain? they?ve already shifted since it went on sale only nine weeks ago, with a whopping half a million already sold so far in Europe.

Forget about those concerns voiced earlier this year from some industry cynics as to whether these types of titles would be too ?Japanese-y? for the western market; the sales figures speak for themselves. And while Europe is nowhere near the amazing three million copies sold in Japan, sales of the title show no signs of slowing.

The game has followed a similar sales trajectory to that in Japan, with sales increasing incrementally week on week after launch, as word of mouth marketing does the business for Nintendo. This is the complete opposite of 99% of videogame sales, which peak around the time of launch, dropping off quite soon after.

If you have still to ?play? (we use the word loosely) Dr Kawashima?s Brain Training: How Old Is Your Brain? which gives 5-10 minutes of quick exercises a day to keep your grey matter in shape, then you can go and grab a copy for no more than Ł20 in a UK game shop.

Nintendo?s suave and sophisticated Laurent Fischer, Marketing Director for Nintendo Europe said of the healthy sales: ?We are delighted that Dr. Kawashima?s Brain Training has been such a huge success in Europe with thousands of people training their brains with this unique title. We hope that the continued success of this and other Touch! Generations software will help gaming as an industry expand and begin to appeal to entirely new audiences.?

Meanwhile, wherever there is a successful new trend in videogames, there is always a host of publishers ready and willing to jump aboard the bandwagon, and it seems Brain Training is where it?s at. Mindscape (remember them?) has just sent us a release announcing the forthcoming PC version of ?Mindscape?s Brain Trainer? with the following blurb:

?Hot on the back of the BBC?s interactive special How To Improve Your Memory, Mindscape has crafted the perfect follow up tool to maintain your new mental fitness regime. A selection of fifteen exercises are divided into five distinct areas, including Mathematical, Spatial, Deduction, Memory and Verbal, to provide a broad and thorough mental workout. Players are able to track their development over the weeks and months in each of these areas via the line charts in their progress screen.?

Aside from the fact that Mindscape has not really been using much brainpower in actually naming the title, SPOnG is not sure of the point of doing something like this on your PC. Five minutes of fun exercises on your DS on the train is one thing, but doing something which is suspiciously close to ?work? on the machine which you stare into for 40-odd hours a week doing actual, painful ?work? is just too much. But, if you are a sucker for this kind of thing, it?s out in September, priced Ł15.
Companies: Mindscape Nintendo
Games: Dr Kawashima's Brain Training: How Old Is Your Brain?