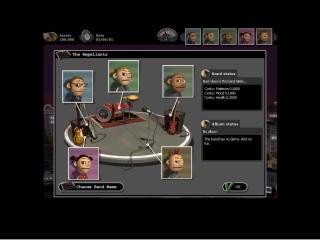 All Images (9) »
PAN Interactive is about to release Rock Manager for the PC, a rock group management simulator developed by Monsterland Produktion.

This is not a ?Nasty Nigel Popstars? kind of deal either. The name of the game is to get to the top, no matter what.

?Anything goes in the razzle-dazzle world of swindle, lies and rock 'n' roll,? said a very rock n roll statement issued by PAN. ?Buy your own singles, bribe local radio stations and stroke the over-sized egos of the self-absorbed and easily fooled musicians. When you're a Rock Manager, do whatever it takes to rocket to the top of the charts and make a shipload of cash money.?

You are charged with creating the band?s sound and image. You get the choice of picking from either cheap, rubbish musicians and expensive, good ones. These assembled musicians will, once picked, indulge in as much infighting and ego-trippery as possible. It?s down to you to keep control.

Then there?s the press. If the public start to lose interest, its your job to get them hungry for new sounds and scandal. Pulling off stunts, whilst keeping the tabloids informed on the quiet is the name of the game.

And then there are the groupies! Rock Manager is available in the UK on 5th October 2001 for PC.