Time to get into the 21st Century 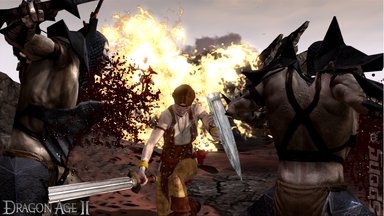 "To summarize, in the case of Dragon Age 2, BioWare neglected their main demographic: The Straight Male Gamer", that's how a poster called Bastal opened a pompously written opinion piece on the official Dragon Age 2 forum in reference to the gay romance option in the game.

He continued his pontification with, "I don't think many would argue with the fact that the overwhelming majority of RPG gamers are indeed straight and male. Sure, there are a substantial amount of women who play video games, but they're usually gamers who play games like The Sims, rather than games like Dragon Age. That's not to say there isn't a significant number of women who play Dragon Age and that BioWare should forego the option of playing as a women altogether, but there should have been much more focus in on making sure us male gamers were happy."

Victorian Society anybody? It got more amusingly Stone Aged though, "Its (sic) ridiculous that I even have to use a term like Straight Male Gamer, when in the past I would only have to say fans, but it is as if when the designers were deciding on how to use their limited resources, instead of thinking "We have fans who loved Alistair and we have fans who thought Alistair was annoying."

So, welcome then the game's lead writer David Gaider. And boy, you can see why he's a writer.

"The romances in the game are not for "the straight male gamer". They're for everyone. We have a lot of fans, many of whom are neither straight nor male, and they deserve no less attention. We have good numbers, after all, on the number of people who actually used similar sorts of content in DAO and thus don't need to resort to anecdotal evidence to support our idea that their numbers are not insignificant... and that's ignoring the idea that they don't have just as much right to play the kind of game they wish as anyone else," he points out.

"The 'rights' of anyone with regards to a game are murky at best, but anyone who takes that stance must apply it equally to both the minority as well as the majority. The majority has no inherent 'right' to get more options than anyone else."

He also adds, "More than that, I would question anyone deciding they speak for 'the straight male gamer' just as much as someone claiming they speak for 'all RPG fans', 'all female fans' or even 'all gay fans'. You don't. If you wish to express your personal desires, then do so. I have no doubt that any opinion expressed on these forums is shared by many others, but since none of them have elected a spokesperson you're better off not trying to be one. If your attempt is to convince BioWare developers, I can tell you that you do in fact make your opinion less convincing by doing so."

We'd recommend you read the entire thing.
Good on Phyrra.net for the find

Ryan550 26 Mar 2011 12:27
1/3
Believe me when i say that the majority of people who bought Dragonage 2 are more concerned about the sheer amount of game breaking glitches than the need to speak for the straight male gamer or otherwise...
What is sad about this is that it is obvious that it isnt anything to do with the writer of Dragonage 2 (in terms of bugs etc) but because the game was so rushed and the final product had so many bugs and glitches. Its a shame the amount of people that will overlook Dragonage 2's writing and atmosphere due to this as many will grow tired of having to do "work arounds" on their bugged quests and simply move on... not that i blame the gamers for this of course, Its just they care alot more about weather the game works or not.... not who they speak for...

Tone 26 Mar 2011 22:37
2/3
there are more problems to DA2 than the romances: there are plenty of bugs (though personaly i don't think i have seen any on pc) the story is very short and the whole thing is just barely held together. i still enjoy it but i blame EA forcing bioware to produce a game every so often so EA can cash on it.
im currently back on origins, where i will stay for a while i think...

Fingolfin 27 Mar 2011 05:21
3/3
Lolz -- Bastal now has an ED entry as a reward for his DA2 whining -- http://encyclopediadramatica.com/Bastal
Posting of new comments is now locked for this page.