Lionhead: No, Fable 4 is NOT Confirmed

Not saying that they're not doing it though, eh? 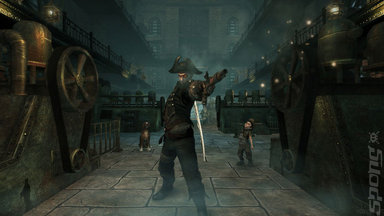 Lionhead has had to launch a Twitter denial that it announced Fable 4 at the BAFTAs - contradicting a report in Future Publishing's C&VG.

We've got to assume that Lionhead contacted the site before tweeting the following:

"Just to be clear @pmolyneux did not announce #Fable4 as reported by CVG, if you read the quote the headline is misleading."

The headline in question is Next Fable Should Amaze Gamers - Molyneux'. However, the URL refers to "Fable 4".

So, a bit of hair-splitting going on there really. Even more so if you read that in the interview from BAFTA, Peter Molyneux explained that, "I have a very clear idea where Fable will go in the future. Trying to be diplomatic, I think that whatever we do next with Fable, we should just amaze people with the quality.

"If we go on, we're not just going to make another Fable, we're going to make something that stands head and shoulders up with anybody else out there - the best of the best - in terms of its technology, its drama and its storytelling."

That said, this is the same games legend who has recently admitted that, "I could name at least 10 features in games that I've made up to stop journalists going to sleep and I really apologise to the team for that."

So, who knows, eh? Either way, congrats to Peter on his BAFTA.

Cfan 18 Mar 2011 13:45
1/11
Yeah, can't wait for another poorly written, bad VO'ed, cartoon characters with huge feet, breadcrumb hand held RPG. only way your going to amaze me is to make a decent RPG not aimed at 10 year olds :D

KeepingitKaiserStyle 18 Mar 2011 14:23
2/11
To the defence of Fable it's hardly as poorly written as another war game where the mighty America must again defeat the dark forces of Communism which seems to video game staple. All game VO'S are poor because they have to be cheesey and short or else each cutscene would be like a blockbuster movie which would kind of take away from the game. I personally think it's great to have all the british actors/actresses on a gameand i think it's brilliant that they gave Mark Heap (the crazy Doctor Statham from Green Wing) a small roll. And like all great family shows, games etc. even one's aimed primarily at children it also has something for the older people in the way of double entendre and disguised jokes. The first fable was Awesome, the second not as good but still great and the last was on a power with the second however even with dlc- too short. I haven't compared it to other rpgs because in general most games are an rpg unless you are actually playing as your mundane self.
more comments below our sponsor's message

deleted 21 Mar 2011 21:15
3/11
Someone explain to me why people play a video game with no challenge? the Mrs like Fable 1 and 2 but was bored with the same old new story of 3 and i haven't really liked any of them as they are just too easy and in my opinion pointless, Molyneux needs to regain the plot in regards to what gaming means, it isn't about just pressing X and everything is done for you.

Exblade 25 May 2011 07:51
4/11
I'm sorry but I am kind of tired of people bashing the Fable series and Fable III in general, I think Fable IV will be amazing because its a great series. and plus Bioware hasnt done that great especially with the disapointment that is Dragon Age II

Ryan550 29 Jul 2011 16:39
7/11
Fable 3 completely lost it entirely in my opinion.. there was just so much that was wrong with it. Fable 3 had a piss poor frame rate, an extremely underwhelming story that was very short and trying to make sure you please as many people as possible (the ones who helped you get to power) to get their support was a chore at best (not difficult but a chore as it was simply.very.boring) and I actually enjoyed the first 2 fable games even though the second was definitely disappointing in comparison to the first.

I understand that gamers love to see the consequences of their actions play out and that is all well and fair but how Fable 3 tried to achieve this was completely flat as gamers knew prior that they needed a certain amount of money to save everyone... that is most definitely one of, if not the most poor attempt at trying to give the game depth I have ever experienced.. Want to save Albion? become the ultimate landlord! ...epic.....

As the poster above spoke of Dragon Age 2... ah.. 2 way street there m8 as Dragon Age 2 was definitely disappointing and rushed (given half the development time that Dragon Age: Origins had is a clear sign here) but Bioware has proven 1 thing well... they can add depth to their games in a way Lionhead has not even come close to achieving (Mass effect franchise anyone? There is more to Bioware than the crap that was DA2). Regardless of weather Mass effect is your cup of tea or not.. in comparison to Fable 3 it has the depth of a bottomless pit compared to the garbage that was Fable 3 and I am not even talking about how Mass Effect 3 will wrap things up as that has yet to come and already the franchise is a good example.

To put it honestly... besides the humour in the Fable franchise.. which might I add is a good laugh and I will never forget the funeral in fable 2 if you make your character laugh as the monks will join in on the laughter. Fable is a franchise that began to decline right after the first and while Fable 2 was "good".. Fable 3 now shows that the Franchise has lost its touch and more importantly... needs to be taken back to the drawing board and given a serious overhaul.

So I think as you may guess... I could care less if Fable 4 ever reaches the light of day unless they actually know what their doing this time.. and they didn't have a damn clue what to do with Fable 3.

and the only difficulty Fable 3 had was the aggravation you had to put up with in the game that was the frame rate (oh hello bowerstone market.. this part especially) and If anyone enjoyed this game then good for them but after buying all 3 games of this declining franchise I am very much entitled to piss in this toilet that they call a franchise..

Can you imagine defeating the Reapers in Mass Effect because you had enough money to upgrade the weapons for your allies in the on coming war? This is a prime example of how fable 3 got it wrong... very very wrong...

i liked Fable 3 19 Dec 2011 13:31
10/11
I liked it..but then again ive never played Fable or Fable II. Just downloaded Fable from the XBOX LIVE marketplace last night, and I'm going to play it when I get home. Also, I hope to God that Fable IV doesnt require a Kinect, because I'm not buying a Kinect just to play that game. Esp. when its $150.

Random comment 28 Jul 2012 10:06
11/11
for a guy who only played fable 2 and 3 of the series. I think its a ok game. I hope theyll keep the spell weaving. No gaunlets this time I hope. Heroes should cast spells with bare hands. I hope theyll improve the npc functions and customizing. I dont really care what they do to it, just make the game worth the playing experience and people hopefully wont bitch about it bullshit
Posting of new comments is now locked for this page.