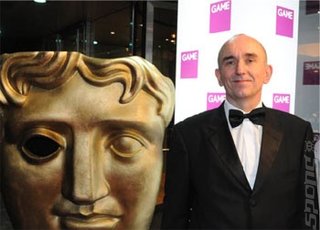 The flamboyantly friendly Peter Molyneux is set to earn himself a Fellowship at this year's Gaming BAFTA Awards. As one of the biggest names in the industry, the visionary developer is being celebrated for a career that spans more than two decades.

Molyneux is more recently known for his work behind the Fable series and the 'will-they-won't-they' Milo technical demo, but cut his teeth in game design when he founded Bullfrog Productions in 1987 and created Populous - a game that shaped a new 'God Sim' genre in and of itself.

Since then the man has been responsible for games such as Powermonger, Theme Park, Magic Carpet and Dungeon Keeper among others. But just as much as his history, we love Molyneux for his ever-enthusiastic vocabulary.

Here's some now, on the news of being awarded the Fellowship, "My first thought on learning that I was awarded an Academy Fellowship was that to be in the company of some of the greatest talents the entertainment industry has ever seen is truly humbling and secondly that this an award not just for myself, but for all the people I’ve ever worked with.”

Aw, bless him. The visionary developer will be presented with the accolade on Wednesday 16th March, and if you're a bit of a fan you can watch the event unfold over a live stream.
Companies: Bullfrog
People: Peter Molyneux