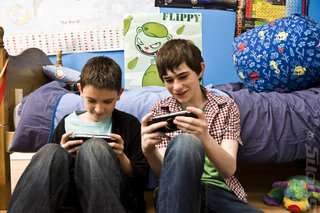 Following yesterday's news that UK first and third-party developers already have PSP2 dev kit in-house, we made some phone calls. Looks like the Sony handheld will be coming to the public in six months.

Due to Sony's understandable non-disclosure policy to development teams in receipt of pre-release hardware, actually getting a developer to admit to having such thing in-house proved difficult. We were informed - under rules of strict anonymity however - by one dev that, "I won't say a thing mate. Absolutely nothing."

Seems cut and dried? Not when a "No, we definitely don't have any PSP2 kit" would have covered it.

We were also informed by a developer, asked if when they looked around their studio they could see a PSP2 device of any kind, "I can't tell you. I'll be able to tell you why I can't tell you in six months though."

Six months from now, March 2011. Just in time for the second biggest buying period in the West, and with enough time to avoid Xmas Kinect, but bumping smack bang into the launch of the 3DS.

deleted 29 Sep 2010 12:23
2/11
PSP2 vs 3DS nintendo will slap sony down i am doubting this very much infact we dont even have any proof of the PSP2 no pics no patents and barely rumors. im guess september-xmas 2011
more comments below our sponsor's message

Nirn 30 Sep 2010 01:29
3/11
Not really. Sony's filed a lot of crazy patents over the years, and rumors have been abound since the PSP1's release back in 2004. Anyway, yeah, Sony's got a tough battle to fight if they plan to release it around the same time as the 3DS. However, if they waited any longer than that, they may simply be too late, and that's even worse. I'm looking forward to see how Sony will combat the 3DS; I see massive adveritising wars, perhaps some new gimmicks from Sony to fight the 3DS, and more. It should be an epic clash for the ages. Try and put up a decent fight, Sony!

Dakidog 30 Sep 2010 05:23
5/11
Honestly, it'll be very hard for Sony to fail even if they lose to Nintendo. Remember Nintendo never really had a competitor in the handheld market(they totally obliterated who ever tried)....they basically had 95 plus percent of that market, Sony managed to move in and get a foothold in Nintendo's world and doesn't look to be leaving anytime soon. It can only get better for Sony if they add the few things consumers yearned for the most(obviously # 1 being a second nub).

Tudim 30 Sep 2010 08:56
6/11
I think that Sony will just announce PSP2 in around 6 months, and it will be released before Christmas 2011.
If Sony was going to release new PSP model it would start marketing it already. You have to build hype before releasing new product.
And announcing PSP2 close to 3DS is not such a stupid idea. It will steal a bit of a thunder from Nintendo.

tarbis 30 Sep 2010 09:15
7/11
Nintendo has always been the king of handheld gaming, but you can't deny the fact that Sony was able to chomp in to the piece of the pie from Nintendo with PSP where others failed(Game Gear, Ngage, etc.). Sony is being terribly bold with going head to head with 3DS, but if Sony play their cards right and give both gamers and developers good features(2 analogs , bigger storage space not like UMD, mini-blu ray?, touchscreen, 3D and etc) They will be able give 3DS a run for it's money.

theprodejeff 30 Sep 2010 09:16
8/11
If Sony wants to stay in the handheld market, they have to release it within a year otherwise they will lose a lot of market share to Nintendo. The handheld market is a tough one so Sony have to do something or it is to late and the know that the games better be good to justify the money. The PSP is becoming out dated.

Justice 23 Oct 2010 23:23
10/11
you guys the most important thing is not a second joypad or 3D but its mostly important that the PSP comes out with a good gaming engine that make psp2 game grafix look like 360 or PS3 then it would start being a big thing, though i did hear a rumour about PSP2 geting the same grafix as XBOX 360 and that would give 3DS a slap on face!!!!!!:D

david 5 Jan 2011 02:18
11/11
Nintendo is bound to fail soon in the future , until the grow up. there motto is crappy, u may have heard of it. help our developer and everybody else kick rocks. thats why the wii is where its at. psp 2 will be good .
Posting of new comments is now locked for this page.