At Last: Milo Game-Play Video Shows a Trick That Works 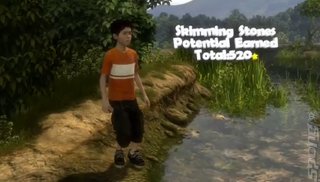 Peter Molyneux's presentation of Milo - the virtual Kinect boy - to the great and the good at the high-brow TED conference in Oxford in July was apparently on an attendee only vision. Not any more.

The presentation saw Lionhead and Microsoft's Molyneux admitting that Milo was indeed "a trick" but not in the way that he had seemed at E3 09.

While the creator of Milo certainly admits in the footage you can see below that the creation is a trick, he also reiterates that it's "a trick that works."

Certainly the game-play aspects - skimming stones for example - give a lie to the idea that the Milo outing is just a tech demo. It also makes Aaron Greenberg's statement that it's not a game, and his subsequent retraction of the same statement - appear to suggest that some more joined-up thinking between creatives and marketing people could be the order of the day.

Watch the presentation yourself, and give us your impressions in the comments below.

They shot themselves in the foot for me with the E3 demo that was so obviously staged. The TED thing looks more impressive but also much, much less like magic. Basically, it's looking to me like if it ever comes out as a game, it'll be a bunch of QTEs tied into some "if he crushes a mouse, he'll become a zoologist through guilt".

I was burned enough with the hype surround Spore and its "evolutionary" gaming.

realvictory 20 Aug 2010 12:22
3/3
I think that taking an idea and turning it into a game, isn't just a case of adding in some code and making it possible. That doesn't make it fun. It needs to be incorporated into the game, rather than just having a game built on top of it.

It makes me think of the Puzzle Quest series. Just having a set of puzzles with some text in between isn't any more fun than just having a series of puzzles with nothing in between. In that case the puzzles are still puzzles, and the bits that link them are boring padding. However this isn't what the Puzzle Quest series does - what it does is, where the puzzle ends, there is no split in the game - you don't (decide to) skip to the next puzzle, because the data, or whatever you want to call it, persists between puzzles; puzzles are a "view" of the game, not a discrete piece of game.

A game is more than a set of ideas, the ideas have to be cleverly weaved together. Which is possibly more challenging than coming up with an idea in the first place. Everyone thinks they can come up with a good idea (and are probably right), but how many good (i.e. original) ideas are made into successful games?