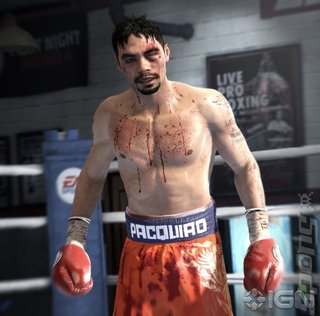 Does EA need mixed martial arts? Apparently, yes, according to Peter Moore, but fore now the company is more interested in world championship boxing.... with the hands only. So, Fight Night Champion coming to PlayStation 3 and Xbox 360 in 2011.

According to a piece in IGN, prior to today's official announcement, ,"just in case you're wondering, this is not an expansion to Fight Night Round 4. Fight Night Champion will be its own standalone disc when it launches at retailers. When that will be in 2011 is anyone's guess."

The development team over at EA Canada in Vancouver is also going against the grain of social this and online that by stating that, "Fight Night Champion will break the mold (we'd say 'mould') of what is expected in a single-player sports game. Players will be introduced to an entirely new way to step between the ropes and experience the drama, emotion, excitement and tragedy of world championship boxing."

The game will come with "between 60 and 65 boxers on the roster for the final product and users will implement the new 'Full Spectrum Punch Control' to move the combatants around the ring and throw some of..." we're stopping the OTT description now until we've seen the game. Suffice to say that you can throw punches.