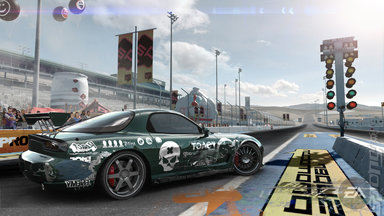 Brrrmmm!!!!
All Images (5) »
EA has finally come clean about the next instalment in the Need For Speed series, and SPOnG has the goods.

The next cross-platform release to come from the esteemed series bears the title ProStreet and will come from EA's Vancouver studio. We'll let the game's executive producer, Larry LaPierre, tell you about it. ?Need for Speed ProStreet accelerates street racing culture by providing the ultimate stage for the pursuit of street racing supremacy,? he said. ?This is a game about building the ultimate performance-tuned battle machine, taking it to multi-disciplinary showdowns all over the world and pitting your skills and reputation against the very best street racers.?

EA promises that every ding and dent will count. The company also reckons that ProStreet has, ?a revolutionary online mode that will redefine the meaning of competitive social play.?

The company frustratingly hinted at the game with a whole new befuddling kind of trailer: the ?pre-tease.?

As with Carbon, ProStreet will be out on every platform under the sun. PS3, 360, Wii, PS2, PSP, DS and PC owners can all look forward to the game this Autumn.

Now cast your eyes over the screens below and get, urm... revved up.
Companies: EA Vancouver
Games: Need For Speed: ProStreet